You have read about our first look at these keyboards, and this time we are now going to delve a little bit deeper! 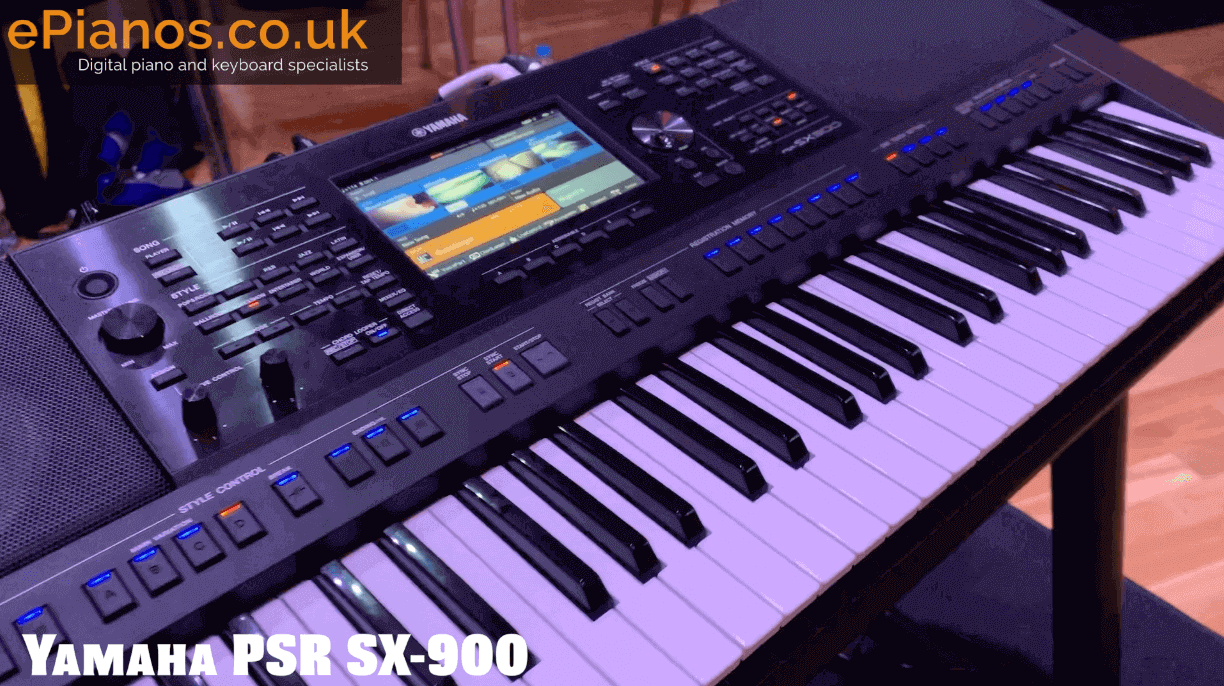 So Lets take a further look at the new SX series!

Well to start with The SX keyboards have a completely different look to older models. They still look like Yamaha keyboards, but they have a new look, and they’ve got loads of differences. The Yamaha PSR SX models have a very slick aluminium front panel, which is the same finish used in Yamaha’s AV systems and also in the new range of CVP800 Clavinova’s.

There are size differences as well. The new Yamaha PSR SX keyboards are 15 millimetres longer than the previous S series, but the body depth is 9mm shallower, so you’ll find the shape will fit into a keyboard gig bag slightly better than before. These keyboards have been redesigned to be able to be moved around with ease, there are grips all around them to help you manoeuvre them safely. Which is really great as I’m sure many people will use these models for taking out to entertain with.

In terms of the content, there’s a lot of it , loads of voices, lots of styles and the acoustic drums are derived from the revo drums that are in the Flagship Genos. So If you compared the drum sounds of the new SX900 keyboard with the older PSR S975, the drums would certainly stand out as being totally different and vastly better.

Voice content in the SX-700 is the same as the voice content as from the PSR- S970. So the sound is excellent, but the rest of the keyboard is totally different that is probably the only similarity between the two models. But it’s good to know that even the lowest model in the new SX series has all of it’s voices from the S970.

So, both the SX700 and the SX900 have 3 upper “part” sections just like the Genos, and these can all have a voice selected at the same time to allow three to be blended together at once.

Lets talk about the sound. With the SX-900 and the SX-700, the speakers have completely changed from previous models. This is in terms of the material that they are made out of, how the amps are driven, and the digital to analogue convertors as well. The SX 900 in particular uses a completely new way of projecting the sound. This has been developed because players are using these keyboards both in the home, as well as many transporting their keyboards around with them, perhaps for the purpose of entertaining. So, rather than on older models where the entire purpose of speakers was to make them sound good to the player, with the SX-900 it spreads the sound out as well. This feature means the the keyboard will sound as good over on the other side of the room, as it does to the player.

The resolution of the sound, much like the resolution of a photograph is now much higher than on previous models in the S Series. The amps are new, the digital to analogue converter is new, the speakers are new, so the content all sounds incredible. 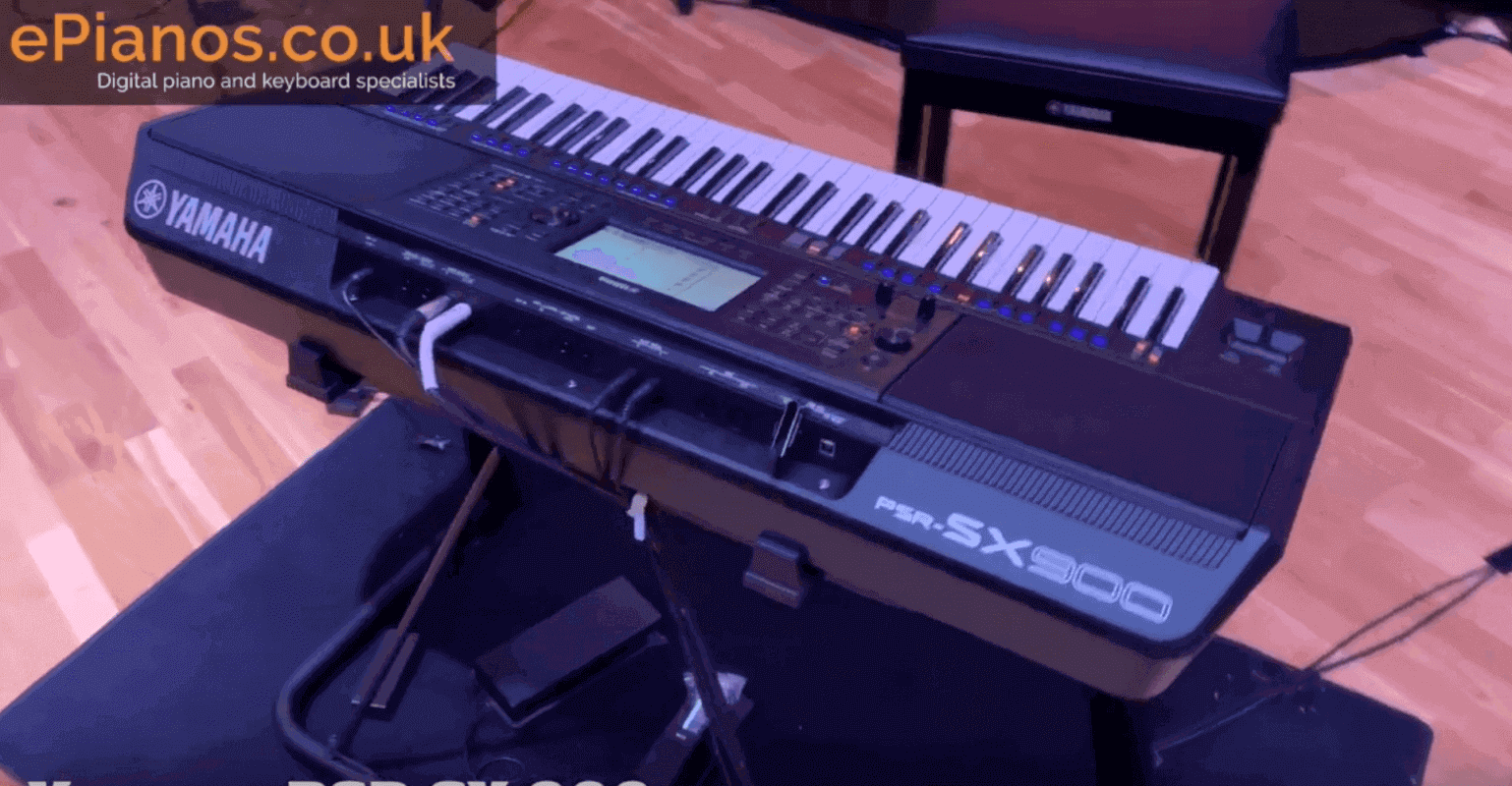 The SX keyboard action is another big improvement that has been made better than ever before. The keyboard action has been completely redesigned for both instruments (The SX700 and the SX900). Y

Yamaha have redesigned the way that the keys feel; It is not just about how solid the keys feel to play, It is also about how stable the keys are. If for example you were to wobble a key from an S series keyboard, there is some movement, but with these new models the keys are solid.

Compare the SX’s FSB keyboard to the Genos keyboard though and of course the Genos gives you the added advantage of the aftertouch which you don’t get on the SX 900. But what we do now have is a really comfortable, and a really positive feel to the Keys which which is excellent. To make this better key action the keys have actually been made longer and and much more stable.

These new SX keyboards operate with the same operating system as the Genos, No one like changes, but we know from experience that the Genos operating system is fast and efficient and of course we now have consistency with Genos, so if you know how to use a Genos you’ll be able to use an SX series with no trouble. The Yamaha PSR SX series does have a slightly smaller screen to that of the Genos. Though the screen on the Yamaha SX models is about the same size as the one on the PSR S975

Another feature on the SX Keyboards is the joystick. This is a really important feature for those who play Turkish music or Indian music, where a pitch wheel won’t do the job.

On these new models everything is assignable and customisable. There are a number of customisable buttons on the panel, and you can plug in foot pedals. Just like the Genos, all of the menu icons along the bottom of the screen can be changed and customised – you can have it however you like, and the options in the menu choices are huge.

There are so many options available for your foot switches that Yamaha have had to categorise them. All the categories show across the top, but in registration for example you’ve got three pages of different things that you can do with your foot switch.

You can control just about every function of the style section from foot switches. You can even control multi pads from the pedals. including something that’s been requested for quite a while which is multi pad stop from a foot switch.

There really are lots and lots of features that Yamaha have packed into the keyboard, but again many of them are hidden away. You only discover them perhaps when you’re just tinkering through menus. To have all of this customising ability is great. Of course all of these assignable buttons can be matched to one touch settings buttons, or with the growing use of adding audio patches through the multi pads you can trigger multi pad from foot switches too.

There’s a new button on the SX, it’s the “style reset button” This is a really great new feature, where you can restart a bar at any time- great for the songs that jump between time signatures. This can also be allocated to one of the pedals.

Another improvement on older models is being able to mix and match style parts from different styles much easier than ever before. There’s a dedicated page where you can choose which parts come from which style and fuse them into your own user style really easily.

Sub out is also included on SX, though when they say ‘sub out’, many people think that this means the subwoofer output- but it’s not. The ‘Sub Out’ on the SX-900 means the auxiliary output.

One of the most exciting new features on the SX900 is the Chord Looper . Each of the 8 registrations in any registration memory give you the option to save 8 chord sequences there too. These can be used to play through your chord sequences whilst you do something else, or play extra things. Each of the 8 chord looper files per registration can have different chord sequences- so you might have a verse, a chorus, a middle 8, and so on. You could record the song in sections, or in it’s entirety, then play over the top with strings or piano.

And this works well when you connect your keyboard to your tablet or smart phone. Yamaha’s free App, Chord tracker will analyse a song in your library and supply you with all the chords. This can now be saved straight into the registration memories in the looper section. You could even go as far as saving an entire songbook of chord sequences within your registration area. You can also change styles and transpose and the songs will continue to play though the style section using your chord sequences.

Internal memory is another huge improvement on the previous S series, you used to get 13 megabytes of internal memory on s series keyboards which basically meant if you wanted to do anything more than just save something like a registration you had to plug in a USB memory stick to work with it. You couldn’t record audio on board. which became quite a limitation. So the SX900 now has four gigabytes of total memory, and the SX700 has One gigabyte internal memory . You now also have 2 x USB ports on the SX900 (still just one on the SX700) so much easier loading in and transferring files between usb sticks. And you can now load and save WAV files, it used to be that you could only load them in, but saving in a WAV format is now possible.

And midi file capacity has now been increased, so typically on previous models 300 kilobytes was the maximum memory per file, this has been increased up to three megabytes.

Why not treat yourself and pre-order one now?