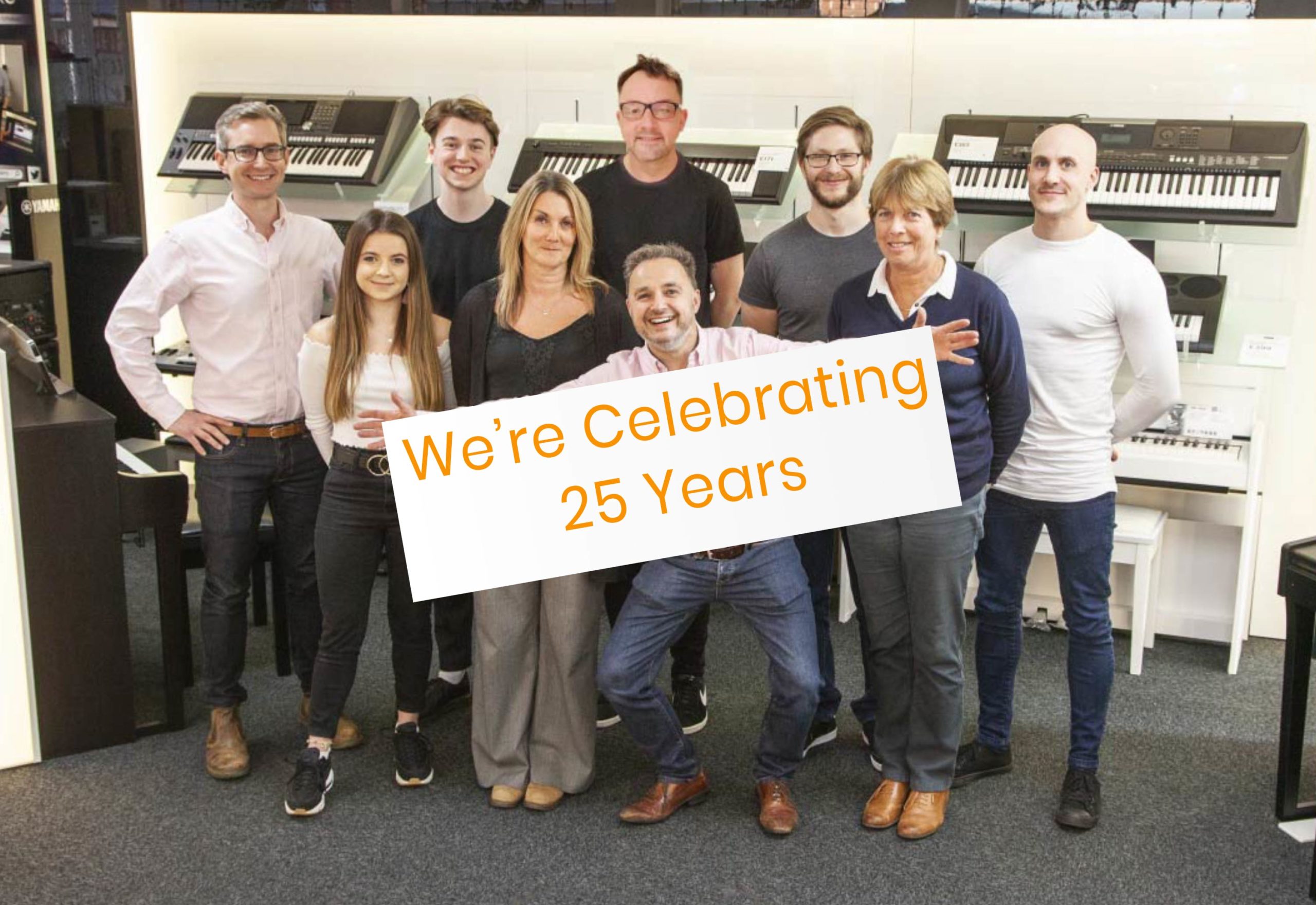 David Cooper, managing director said “it’s been an amazing 25 year journey and the input of the staff over the years has helped us adapt to the changing climate. Many of our current team have been with me for between 15 and 20 years sharing the enjoyment and seeing the growth and success of our business unfold”.

Set up back in 1995 by David Cooper, in Church Walk Banbury- with his mum helping out on Saturdays when it was busier, He now employs over 10 staff and trades from a large warehouse, and showroom facility behind B&Q in Canada Close, Banbury.

David started learning about the industry from the age of 15 in 1982 when he got a Saturday job in a small Banbury music shop, Glenn Derges Musical Instruments whilst still a student at Banbury School.

Enjoying it so much, when the business started to struggle he continued to go in unpaid, most days after school and in school holidays. When he left school they put him on the government YTS youth training scheme and he then progressed to full-time staff 9 months later. 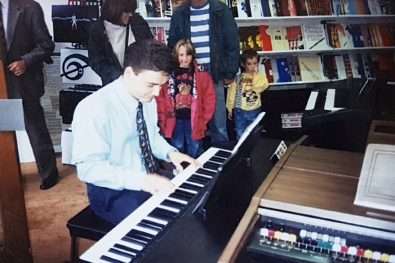 After 6 years in Glenn’s shop David left the music industry to sell cars for 7 years before setting up his own general music shop- One Man Band in Church Walk Banbury in 1995.

The business has gradually grown and the store expanded into bigger premises twice stocking over 250 guitars, 30 flutes, saxophones and clarinets, 10 different drum kits, and all the Yamaha digital pianos and keyboards, but, as the internet developed, the store then began to experience a decline in business as people’s buying habits changed.

In 2014 David and store manager Chris Hammond went to an MIA trade conference at Whittlebury Hall to look for new ideas.

One of the speakers emphasised how being found on the internet was very difficult and videos were a great way to get you found due to Google putting them to the top of the results page as people loved watching videos rather than reading text. This was the turning point for the store- and David and Chris set about developing ideas for videos and decided that offering help and advice on getting the best out of top-end keyboards would be a great way to engage with new customers.

They set up a channel on Youtube called “Tyros Tipsters” and bought the website domain with the same name and then started making and uploading videos the following day.

Chris developed his skills in video production and marketing and sales of their most expensive keyboard “Yamaha Tyros” went “through the roof” and their customer base grew, many of them, not their current customers- just people wanting their help and advice- and through this new channel, the shop’s sales increased.

The companies’ “Tipsters” brand had launched the business to a far wider audience, and the boys have become known worldwide for their keyboard help and advice videos.

Customers already feel they know the duo ( a bit like TV personalities) and there is an air of trust and familiarity already established before customers phone in or visit the store.

In 2016 Edna Halliday, owner of Whitley Bay Organs in Newcastle sadly passed away, she had built up one of the most successful businesses in the country selling organs, keyboards and digital pianos based in the North East and One Man Band was lucky enough to acquire her business and continue her legacy.

With the combination of their new large database of loyal Whitley Bay customers and the success of the store’s “tipster” videos the business’s sales dramatically increased, and the store developed its videos to product demonstrations, reviews, and model comparisons.

In 2017, One Man Band ceased selling guitars and general instruments in its White Lion Walk premises to focus on its new business model selling just new and pre-owned digital pianos, keyboards, and organs.

The company’s website epianos.co.uk, its online videos and the acquisition of Whitley Bay Organs had made such a significant contribution to the company’s sales that in 2018 One Man Band relocated to its current much larger premises in Canada Close giving them a large warehouse, offices, 5 teaching studios, and 2 showrooms- with ample free parking. It also has a warehouse up in Newcastle.

In the last 25 years, buying habits have changed significantly and One Man Band has adapted to the changes now making it one of the UK’s leading keyboard instrument dealers. 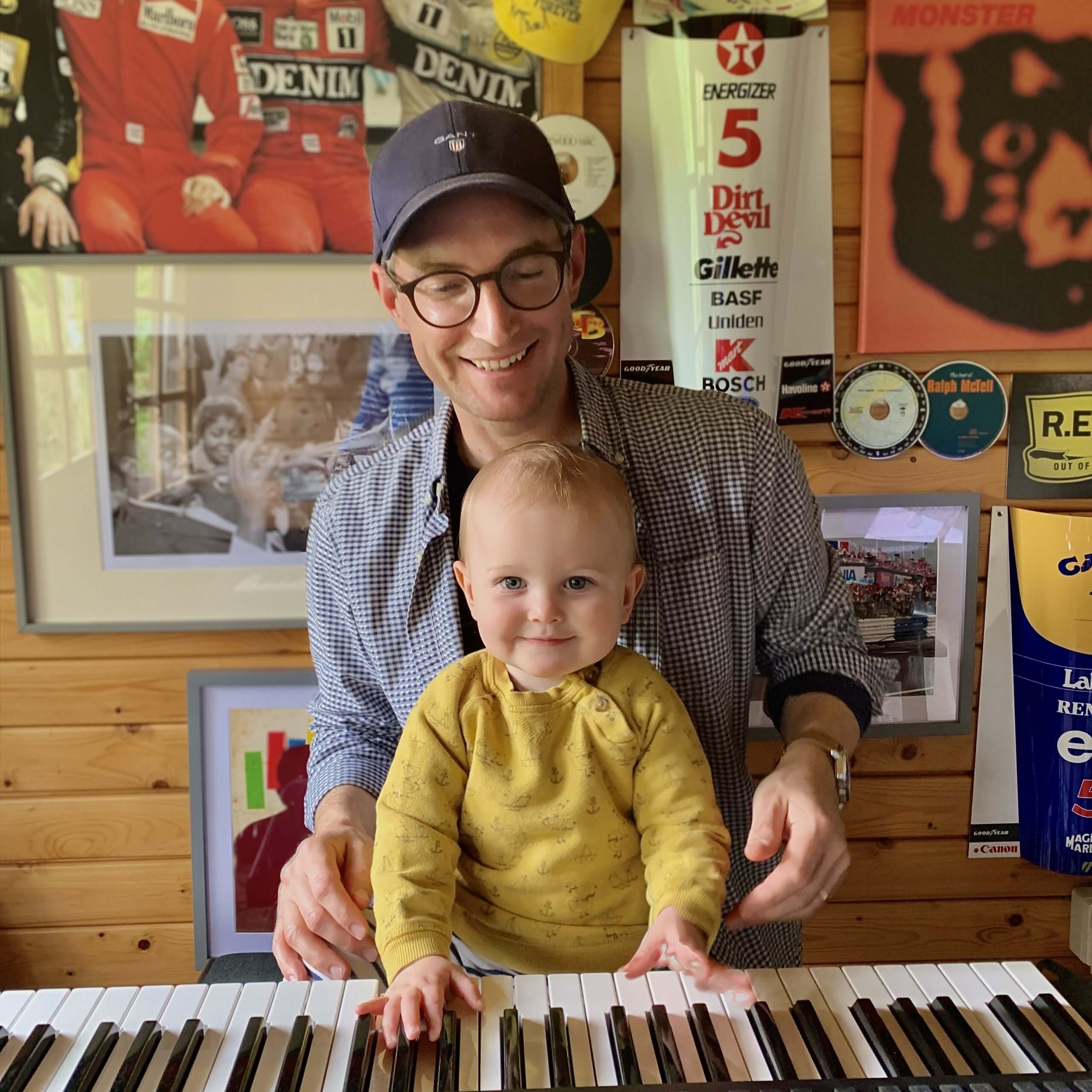