Many Tyros players buy a USB memory stick like the one pictured below for storing all sorts of things like registration settings or extra songs and styles.

There are so many to choose from so how do you know which one is right for you?
The main differences between them all is the size of the memory, that’s to say how many files it can hold.
You may have seen the following terms used; 2GB/4GB/8GB or 16GB, well, the bigger the number the more storage space there is inside.
A common mistake is to spend too much money on one with lots of memory (let’s say a 16GB) and only use it for storing registration files which are so small that it only takes up a tiny fraction of the space. A customer of mine likened it to parking a Mini in an aircraft hanger!

The majority of Tyros players will be just fine with a 2GB version for saving their favourite registration settings or your performances played on the Tyros because the file types used are tiny.

The main reasons it becomes necessary to use a larger USB memory stick is when you want to record yourself singing using a microphone or transfer music from a CD, this is because the type of file produced (called a WAV) is very big and takes up a lot of storage.

So in short, if you do not use a microphone or a computer with your Tyros then there is probably no need to waste your money on a USB memory stick any bigger than 2GB, yes it is theoretically possible to fill it up with registration settings but you would probably wear your finger down to the bone before you did!

It’s amazing really that something so small can hold so much information, technology moves on so fast, it wasn’t that long ago computer memory took up a whole room! Indeed the astronauts that flew to the moon had less memory than you have on your USB stick.

Another good use for the USB stick is to perform a data “Back up” something that we will cover in more detail in a later article, but in short it is a way to save all of your information from your Tyros and keep it safe for another day. Many of our customers perform a back up of their old keyboards when they upgrade so they can load all their old favourite settings on the newer model.

Using a USB stick it is also possible to increase the number of Music Finder songs on your Tyros to roughly 2100! – If you have bought a Tyros from us we will have already done this for you but if you haven’t and would like the extra songs you can email us on sales@epianos.co.uk and we will send you the extra songs along with instructions on how to load them all up.

Here is a video of David explaining how the Music Finder works. 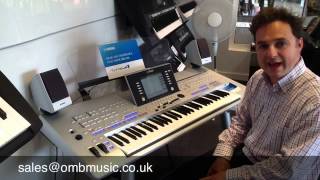