Today we are going to go through some of the differences the between the new Yamaha SX900 and the Yamaha Genos. The Genos came out November 2017, and so It’s been out for a little while now.

The Yamaha SX900 has just been launched. The SX900 has got many features the same as the Genos, but it has got a few cut back features too which I want to explain to you… 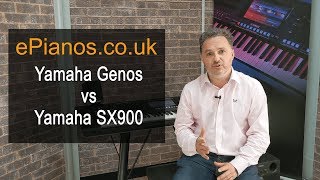 Super articulation 2 is another great feature which the Yamaha Genos gives you. This feature is not on the Yamaha SX900. The Super Articulation 2 means that you get some extra touch controls, and these are on sounds like Flugelhorn, Saxophone, Clarinet etc. You will get more control with your play ability on this feature. With the SX900 you just get super articulation (which is still really good). You just miss a few of those really great sounds that the Genos has to offer you.

Another simple difference between the Yamaha Genos and the SX900 is the assignable buttons; the ones that you can use to allocate a certain adjustment on the keyboard. There are seven on the Genos and just six on the SX900.

The Genos also has what’s called an FSX keyboard. The keyboard is a great keyboard feel wise but it also has after touch. The SX900 doesn’t have the after touch.

Now, one of the things that currently is different on the SX900 is that Yamaha have brought in a new looper feature. The looper feature is brilliant for looping chords; every registration memory of each bank gives you the option of 8 different chord sequences. These are great! You can have a chorus, a verse, a middle eight; you could have a whole choice of songs built into each registration button. Once you have played the chord sequence in once, that stays in the memory and you can keep going back and looping different ones in order with a touch of a button, and the chord sequence starts again. You can even play back the chord sequence and change the tempo, or the transposition, then you can jump between styles… so there is loads of things you can do within that chord sequence. That is a feature which the Genos currently doesn’t have.

We know that there is a firmware update coming out in October, and we are hoping to see that the Genos then gets the looper as well. At the moment it is just the Yamaha SX900 that has this new feature. It is the sort of thing that you see Ed Sheeran using; using the looper pedal to bring parts together. This feature means that you can perhaps put a chord sequence in, and then play over the top with the piano etc. You could use other sounds and play again, or think about changing your controls while you’re playing. So the the looper is a very clever new feature that at the moment just the SX900 has.

The Genos gives you six assignable knobs, and having these enables you to go through and change frequencies, part of your EQ, you can also change the resonance of the attack, and the decay of sounds. So you have got quite a lot of control. You can have six at one time together, available to adjust on the on the panel. On the SX900 you only have two assignable knobs. This simply means that you have got a little bit less available to get the control as you’re playing the keyboard (without going into different menus to do so).

The internal memory is 8GB on the Genos, and it is 4GB on the SX 900. Again, a big a memory capacity for the Genos and even more outputs too. There are 4 sub-outs which are the auxiliary outs on the Genos. On the SX900 there are just 2.

The Genos is renowned for its fantastic drums, ‘the Revo drums’. They are drums which give you a different bar sound every time it goes through a sequence. Each bar, each snare drum sound or base drum sound is going to be slightly different. This is because a real drummer doesn’t sound exactly the same every time he hits the snare drum, each of these hits on the skin are going to make a little bit of a different sound. Yamaha have actually made this part of the variations on the drum kit, so the Revo drums on the Genos are really clever. Now the way that they are wording it is that they’ve derived the new drums on the SX900 from the Revo Drum sounds, but it won’t give you the same variations that you’ve had on the Genos.

Finally the sounds of the Genos will be better. The DSP power is far more, the digital effects built into the sounds, the extra articulation sounds, the super articulation 2 voices, the Revo drums etc. The Genos overall is a better keyboard. The baby Genos (the SX900) is phenomenal for the price, for the touch screen, for the speakers etc. You will be so impressed with what it does. But I think the Genos will always have a place as the flagship model. All in all the Genos is definitely the top keyboard in the range; it is a great instrument with loads of extra features. The Yamaha SX900 is a great baby brother and I would welcome you to try it and see for yourself.

I hope that you have found this comparison between the Genos and the SX900 keyboard useful. Here at ePianos we know how important it is to make the right decision when making a big purchase like this. We are always at the end of the phone, so please do feel free to give us a call on 01295 266788, or alternatively drop us an email at sales@epianos.co.uk

Still not sure which model is right?

Our experts have created a quiz to find the perfect model for your needs. Introducing Piano Chooser 3000 - Click the button below to begin...