Discover the Yamaha Genos and learn how it compares to the outgoing flagship Yamaha Tyros 5 in the first of our exclusive GenosTipsters | The Complete Guide episodes, made available separately for the first time to the public.

This is a preview of the first of 10 episodes in our Yamaha Genos | The Complete Guide, and in it we compare the new flagship Genos to the outgoing Yamaha Tyros 5. 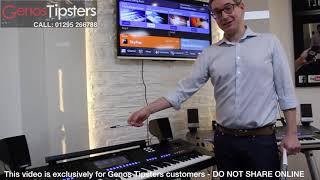 Tyros 5 inside your Yamaha Genos

Today I am going to be telling you all about the main differences between the Yamaha Genos and the Yamaha Tyros 5. Of course you’ll be used to playing the Tyros 5, and so with your new Genos you might wonder where some of the buttons have gone and which things are different. This is going to be quite a broad overview, but it should be good to get you going.

The most important thing I would say about changing over to the Yamaha Genos with us, is that in the Genos you’ll have everything that you had on the Tyros 5. You’ll have all of the same voices, all of the same styles – everything. By the time we have delivered it to you, we would have transferred everything over from Tyros 5.

In effect, you have your Tyros 5 built in to your Genos! So you’re not losing anything. The same goes for if you’re changing from your Tyros 4, 3, 2, or 1; it’s all in there. All of the old voices are in there and we’ll get into how you are able to access these later on.

Some of the first things I want to talk to you about are where Yamaha have moved some of the buttons to on the Genos. If you take a look at the Genos, you will notice that the blue buttons have all stayed in the same place. This is really good of Yamaha; they are quite sensitive to people changing and upgrading through their keyboard range.

Yamaha have also kept the style controls on the left too, as well as keeping their one touch settings and their multi-pads on the right. Registrations are also here as well (I will talk more about how registrations have changed on the Genos a little bit later on). Generally speaking you have the speaker mounts on the top of the keyboard, and the music rest and the big screen in the middle. Everything is more or less in the same place.

What else is new on the Genos?

So what else has stayed in the same place? We still have the style controls on the left, we have our intros, main variations, and endings here as well. Your start and stop buttons, and of course your main accompaniment button is in there on the left too (same place as it was on the Tyros). Moving over to the right side of the keyboard, we have the part select (again, this is in just the same place as it was on your tyros).

On your Tyros, you had the USB slot (for putting various different files onto your Tyros) on the front right hand side. On the Genos, the USB slot is also on the front right hand side of the keyboard. However, we also have two extra USB slots. There is one slot in the back, and there is another one underneath. The slot underneath does have a panel on it, which means you can plug a USB into it and just leave it there. We have found this to be very useful. If you put a large USB stick underneath, you can use it just as an extra storage unit.

We also have the multi pads, which have moved ever so slightly, (but they are more or less in the same place there as well). As you go over to the left of the keyboard, you’ll be able to see basic things like the master volume are in the same place, but if you look to the left of it, we have the on and off button very handily. They have moved this button back to the front of the keyboard instead of being hidden around the back like it was on the Tyros. You have probably spent hours and hours craning your arm over the back in the Tyros to try and turn it on and off.

So lets talk about a few other buttons on the Genos that have stayed in the same place that you’ll be familiar with. We have the harmony and sustain buttons to the top right hand side on the Tyros, and these can be found in more or less the same place on the Genos.  On the top left of the Tyros you have the mic controls for your microphone inputs and your vocal harmonies. These buttons are on the top left of the Genos as well. up in the mic section, you have the mic volume control as well. This is going to be quite handy for you singers out there.

Now, quite an important function I think is the style control on the Genos. The first time you sit at it, you might go to choose a style from the left hand side like on your Tyros, and you might think that there isn’t a style section on the Genos.

This is because your styles have now moved onto six white buttons, to the top right hand side of the screen. Personally, I think that this this makes it much easier. This also saves a lot of space, because most of the keyboard is operated through the touch screen. I will talk to you more about the touch screen a little bit later on.

What you would see is that when you press style, up comes all of our styles. When I press voice, up comes our voices. These white buttons (and the same goes for ‘song’ as well) will be in place instead of the voice category and the style category that you had on the right and left. So a little bit different.

Registrations on the Genos

So lets talk about registrations on the tyros. We had the registrations below the screen on the front right hand side of the Tyros (the blue buttons). This is a very useful section which most people that play Tyros have used.

On the Genos the registrations section is no longer on the right hand side of the keyboard, they are underneath the screen. You might have noticed that you also have an extra two! We have now got 10 buttons in total for registrations. The sliders, which were also under the screen on tyros, have now moved to the left of the screen on the Genos. We will look more into the sliders later as well.

We also have these new knobs as well (located above the sliders), which can be used for various different functions. Again, we’ll go into more depth on this later on. Your one touch setting buttons are still just to the right of the screen as they were on the Tyros, although they have moved ever so slightly. Your data entry wheel, which was just below the screen on the Tyros, has moved over on the Genos just over to the right hand side of the screen at the top.

Now on the right hand side of Tyros we have the voice effect buttons; you have probably noticed that on the Genos if we are to look at the same section, it is missing quite a few buttons. This has to do with using the touch screen, because most of the other sections that we had up here can be operated by touching a button on the screen now. Again, we’ll go into more detail on this later on.

You will realise the further into looking into the keyboard that we get, that the touch screen has actually allowed the Genos design to save a lot of space.

You could almost get away without having any buttons on the Yamaha Genos, because you could control virtually the entire thing using the touch screen! Another thing to mention is the balance displays.

On the Tyros, we have the balance displays along the bottom of the screen, so you could see what volume your various voices and your style accompaniments were. This has now changed on the Genos, and the balance displays are all up above the sliders, on another little screen with a digital display. As I move the sliders up and down, you can see the values changing on the screen.

Also up in that section, just to the left, we have our song section. On the Tyros this was more or less in the same place, but Yamaha have just moved it ever so slightly. We have got song A and song B in this section, and if you’re wondering what that means, song A would be for your on-board recording. If you had an extra song that you were perhaps playing through a USB stick; like David sometimes does a recording or a performance with someone singing (off from a USB stick), you can balance the volume of the two together using this slider. So it’s quite handy and a much more ergonomic design for your song controls.

Buttons on the Genos

Below this section, you may have noticed that there are also some new buttons (the top right hand side of the keyboard below the white buttons) called the assignable buttons. These again, are designed to make your life easier when you are operating this keyboard. As you might have guessed by the name, you can assign these buttons to various different tasks. You get six assignable buttons here, and there’s an extra one over on the left hand side of the keyboard too. A lot of people are assigning this button to fade in and out, because that button as you have probably spotted is not on the keyboard any longer. So assignable buttons are going to be very handy. These buttons were not on the Tyros.

We have now spoken about the USB’s on the Yamaha Genos, the fact that there are two new slots on the Genos and the knobs. We have spoken about how the screen is a touch screen (It’s also considerably larger as well). On the Tyros the screen is probably a little bit misleading because it has a whole panel at the front. The Tyros doesn’t have a huge screen, but when you compare it to the Genos, we now have a 9 inch screen from corner to corner.

In case you’re wondering there is no panel to lift the screen up on the Genos like you could with Tyros. Many people however, are finding that because of the angle (being slanted), when you are sat down playing on the Genos, you can see the screen very clearly. The quality of the screen is quite a lot better now as well, so it is much easier to navigate around.

If we are to look back up to the 6 white buttons again (to the top right of the keyboard) another new button is ‘Playlist‘. This is part of the six sort of general control buttons. Really, you can think of this as section as music finder, but it’s it’s much more in-depth than music finder; much more useful to use. And again, we’ll go into it in more detail. But playlist, when I press that, we’ll open up a list of songs on here.

This article is a preview of our far more extensive guide covering all aspects of the Genos, available for £399.