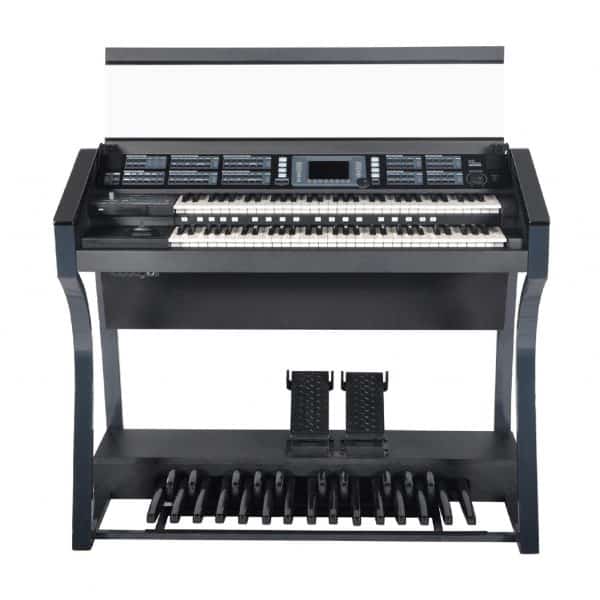 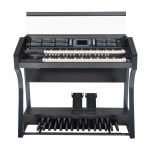 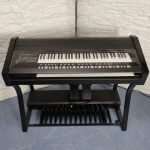 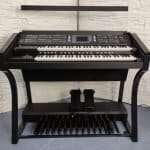 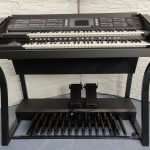 We offer 12-60 months finance at 15.9%APR on all purchases over £550 - please contact us for a no-obligation quote.
Category: Orla
Watch on ePianos TV 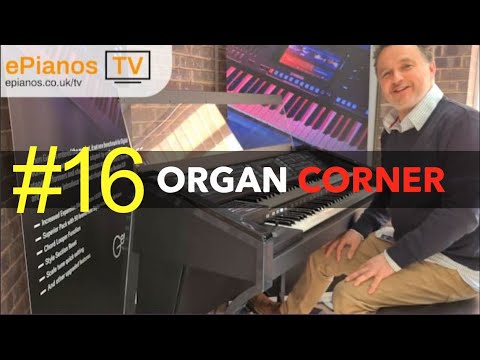 Registration Bank: A B C D

A review of the Orla RS800 by Michael Wooldridge

Today we are looking at something rather special, the Orla Ringway RS800. I think most of us have seen the previous range of Ringway organs, which were excellent value for money, but the newer range has moved on in leaps and bounds in terms of the quality of build and sound.

If you’ve not encountered Ringway products before, perhaps I should tell you a little about the company. Ringway was founded in China back in 1994 and since then has become a major designer and manufacturer of digital pianos, electronic keyboards, electronic organs, electronic drums, midi and audio interfaces and more. They are huge, employing over 1,000 people in China plus others in the USA, Germany, UK and Hong Kong. Their main plant occupies 50,000 square meters, that’s over 12 acres, or around 6 or 7 football pitches!

The success of Ringway comes from their quality of manufacture, their company commitment to serve the customer wholeheartedly, and the fact that making music in China is still culturally hugely popular; I know their organ sales alone are still in the tens of thousands in their home market each year, which is wonderful.

This new Ringway is really sturdy. Finished in a modern black, it has a strong metal frame to surround its two 61-note manuals. Unusually, it has a 25-note pedal-board, unusual in as much as they are spinet-organ style short bass pedals but the luxury of having 25 of them does allow for some very musical bass lines. There is a full-length music desk, which folds down to become a keyboard cover; I’ve always liked this design, as it allows space to spread out long arrangements and it supports the top of any loose copies well.

Before looking more closely at the details, I must say that I was amazed by the sound, which is big, and full and lively and exciting. It must be noted that this instrument is designed for those who want to play fabulous orchestral arrangements, big band favourites, pops and so on, it is not a traditional organ and it is not designed with that sound palette in mind.

I mentioned that the RS800 doesn’t owe much to its predecessors, which is because it has totally new sound generation and a totally new speaker system. It is the combination of these factors that gives it such a huge sound! There is a colour screen for selecting options as they arise, but more importantly, there are plenty of actual voice buttons, so it is very easy to navigate. To help even further, there are 16 pistons (preset buttons, registration memory buttons, whatever you prefer to call them) between the manuals, always the easiest place to use them, and it comes with four banks of these ready programmed to get you started.

A good design feature here is that when you change between registration banks, the sound doesn’t change until you press one of the pistons, which means, unlike on some other instruments, here you can effectively use all of the presets just as you like, hopping between all of the banks within a piece if you want to.

As well as saving the sound registrations, the presets also save the rhythm and style settings but there is a D button, which disables that part of the memory feature, so that you can use all of the memories with any style of your choice. The factory settings provided, in keeping with the style of the instrument, are pretty much all orchestral. They include a lovely Grand Piano with Strings, a String Ensemble, Flute and Harp, Woodwinds, that sort of thing, so you can have a pretty good go at playing orchestrally without actually having to set any registrations yourself. There are also some slightly more modern presets, including a Guitar with Strings and Harmonica with Electric Piano.

You will have seen in the photos that there are two expression pedals. Like some instruments from another manufacturer, the left one of these is to control the pitch bend function; the pedal is sprung into its central position and I’ve always found it best controlled by using the toe of my right foot to press on the bottom or top of the pedal as required. When not over-used I find this to be a wonderful facility, set perhaps to give a semi-tone or tone pitch bend to stylise Pan Pipes, Saxophone or Guitar sounds, or set to a full octave to give a controlled shift to perhaps a lead Trumpet in a big band sound or the lead Violin in a big string sound. When I first encountered this facility it did take a little while to get the hang of using it but now I really love it and wish all organs offered it because, whilst many instruments, including this Ringway, offer a pitch-bend wheel or joystick, as an organist we don’t generally have a free hand to use it!

The right pedal is a standard volume pedal, complete with a foot-switch to either side, the left of these doing things like rhythm fill and glide, the left one settable to give Registration Shift options, including the facility to programme a sequence of preset registrations in the order you want them to appear.

In the Upper and Lower polyphonic voice sections, you will find very clearly labelled buttons which take you in to family groups of sounds. These include Piano, Organ, Guitar/Bass, Strings, Brass and Reed/Pipe. When you press one of these the screen changes to give you a range of voice options from that family, displayed eight at a time, easily selected using the buttons below the screen. For example, when you press the Piano family button, the screen shows you are on sound select page 1 of 5 and offers on the first page Grand Pianos 1 and 2, Oct Grand Piano, Grand Piano & Strings, Honky tonk Piano, Electric Pianos 1, 2 and 3. It seemed to me that the most likely voices you’d want appear on the first page but to move through them you use the Page Up and Page Down buttons to the right of the screen. You can adjust the volume of each section using the button strip to the right of the voice section.

Something nice is that you can really easily edit any voice, the system works well and quickly and simply. To do this, you double- press the voice selector button and the screen changes to give a whole load of options that change the attack, release and so on that shape the voice, but also other options to change the Brilliance (probably the most useful for a quick change), the Pan, the Octave (another useful one), Touch Sensitivity and so on. Whatever changes you make will be stored as a part of the whole registration you save to the pistons between the keys, though the way this instrument is set to work, you do also need to remember to then save your pistons into one of the four memory banks, A, B, C or D, to the right of the screen and, of course, for long term safe storage or for taking them a friends house to play their Ringway, on to a USB stick.

Having said it isn’t an organ, in the voice families I mentioned the Organ section. This does have in it a small range of organ voices, including quite a decent church organ and a few Rock and Jazz Organs, but they are really just okay rather than special! There are also a couple of Theatre Organs, one a big slightly Blackpool Tower sort of sound and one a quite enjoyable mellow Tibia sound, but, as we said before, that isn’t what this instrument is all about, and there are no drawbars, digital or otherwise, it is the power of the mighty Orchestra that leads the way here!

The Lead and Pedal voices work in exactly the same way as the Upper and Lower polyphonic sections, other than they have a smaller range of the most useful sounds on their selectors and then an All button in case you want to access any other voices. It’s handy that every voice bank has a button for Sustain as its top right selector, making it easy to add or remove it as desired. The Rhythms work in exactly the same way as the voices. There are buttons with family headings including 8 Beat & 16 Beat, Big Band & Swing, Rock & Boogie, Latin and so on. When you choose one of these, the screen gives you the options available in that family, so selecting Country gives things like Country Pop, Country Swing, Blue Grass and Slow Country. Selecting Waltz offers English Waltz, Jazz Waltz, Musette, Mazurka, Viennese Waltz and the like, all just as you’d expect.

For each of these Styles there are A and B variations, B generally being more active, plus 2 Fill-Ins, Intro and Ending. The accompaniment Styles are pleasant to use, they are not too over-powering in the way that you can only play one piece to them but, rather, ones you can use for many items in that general style. You can make changes to the Rhythms, simply swapping the drum kit being used, or changing the instruments playing the orchestral parts of the style, which really is child’s play on the screen.

The RS800 doesn’t have the facility to programme drum parts from scratch, though there is assignable keyboard percussion, but it does have a rhythm sequencer, in which you can set up a sequence using all of the different drum patterns and fill-ins to make it better fit the piece, much as we used to do on the popular Yamaha FS/ FX range, if you’re like me and old enough to remember those!

Something I find useful when playing for dancing, or when playing to a rhythm sequence, is the fact there is a clear on-screen display to show the bar and beat number. Tempo control has gone retro, with a proper rotary knob. There is, of course, a lot more to this instrument than we can cover here, including an equaliser, which is good for balancing the sound to suit your environment, a very easy record facility and MOC (Melody On Chord), for which they have taken the Yamaha name for what Lowrey used to call AOC, where your left hand chords are automatically duplicated on the upper keyboard under the melody to give a bigger sound.

If you like orchestral playing, you will love this new organ!

If you’ve enjoyed this review, subscribe to Organ & Keyboard Cavalcade Magazine for the latest news and views from the world of keyboards, digital pianos and home organs, plus lots of hints, tips and tutorials. www.CavalcadeProductions.co.uk