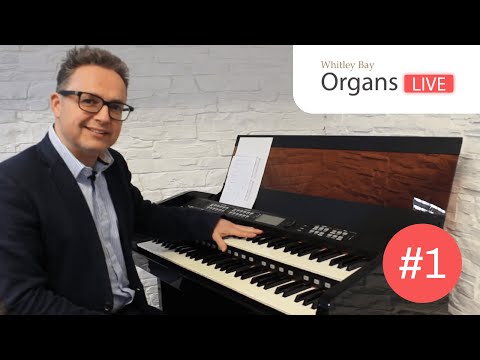 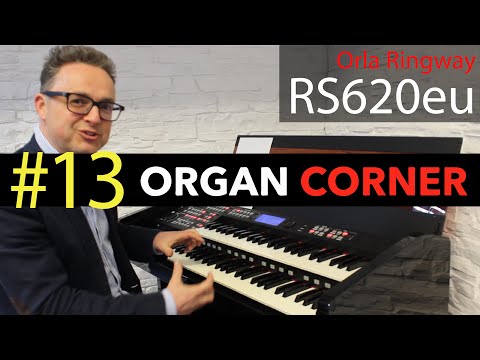 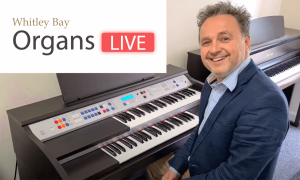 You get some very realistic solo instruments alongside many beautiful organ presets, and with the newer styles and voices developed by Ringway you’ll be able to find those  sounds you’ve been looking for with ease.

The RS620 includes a built-in USB port which is fantastic for loading in registrations.

Following Orla’s collaboration with Ringway, the RS620 was launched and the neat, contemporary, very compact organ has become a big hit

At only 18 inches deep and 44 inches wide the Orla RS620 offers a stylish and very compact home organ. Finished in a very shiny black polyester, it’s smart appearance is home to over 300 sounds and 200 styles, including 150 from Orla’s “super style” library.

The Orla also includes a freeze facility for the left hand allowing you to freeze the style from any registration and use a sound set up from a different one, giving you literally hundreds of options.

Ringway has also cleverly set up each factory preset in the organ to use the split keyboard facility, this effectively creates a third manual, with a suitable sound set to the right hand end of the Lower Manual to make a good musical change by simply moving from playing on the Upper to playing using the Split section. To make life easy the split point is set in the same position for every preset and any octave changes in the voices required have been set ready to use.

All of the factory presets have been designed with the home enthusiast in mind too- and all of the popular sounds such as Organs, Mantovani, Strauss, Glenn Miller, Shearing etc. have been covered. The team at Orla have also been careful to balance all of the preset registrations so that it works well to move from registration to registration within a section without sudden volume changes.

For those especially into theatre organ sounds, Orla have used their links with Reg Rawlings of Total Transformation Technology to include some Blackpool Tower Wurlitzer sampled sounds. The range chosen includes beautiful tibias, tibias and voxes and full organ samples.

headphones, line out L&R, mic IN, MIDI IN & OUT

All specifications and appearance are subject to change without notice

Ringway organs have really made a name for themselves here in the UK. The instruments are a joint venture between the very long established Orla Europe company in Italy and the UK, who have made many very popular and successful organs over the years, including the Mantova, the GT9000 and the Grande Theatre, with Ringway TECH of China, who very much thrive in their home territory with organs and digital pianos. The combination of  expertise from Orla and Ringway has produced instruments which very much deliver what we want of organs here in Europe.

The RS620 is very smart in its gloss black  cabinet with a modesty panel to close in the back, a full length music desk and a good sound with a  great many sounds and styles from Orla instruments that would normally cost significantly more.  With a 49-note Upper Keyboard, a 61-note Lower and a 20-note pedalboard, all with initial touch  response, it is superb value for money.

It is 113cm wide, 46cm deep and 94cm high (119cm with music desk), so takes up no more  room than a top of the range single keyboard, but brings with it all of the freedoms of being able to  play music in your own time at your own pace through having pedals, which allow you to play

without styles driving you along, and on the whole, people, myself included, find this ability to make  their own music at their own rate is hugely satisfying.

If you read the literature, you will see that the amplification technically sounds likely to not be very loud, as it says it has 2 x 10 Watt High Power Eco Amp, but the reality is that it is plenty, so the rating is perhaps a little misleading.

Because of the Orla sounds included amongst the 300 voices, the Ringway has a lovely warm  organ tone, plus many other very good orchestral voices. Better still, there is a really  straightforward and simple to use Voice Edit facility allowing you to change everything about the  voices including Cut Off Frequency, Resonance, Attack, Decay and Pan. The simplest thing with  this is to play with the Cut Off, as this very quickly makes sounds brighter or more mellow and is  very effective at creating extra and different voices to suit you.

Incidentally, don’t be at all worried about how to use these and other facilities, as the manual has  been written here in the UK, so is written in an understandable fashion and, although it wasn’t quite  finished when I went up to do the review, there is also to be a DVD owner’s manual, so you can  actually see everything explained, which I’m sure is a good idea.

I realize that these days many instruments have a far bigger number of voices but whilst the idea  of this is that you should always find what you seek, the reality is that most players only use a  handful of the available sounds and the 300 here, especially with the very easy way to edit them, is  more than enough.

For those especially into theater organ sounds, they have used their links with Reg Rawlings of  Total Transformation Technology to include some Blackpool Tower Wurlitzer sampled sounds.  The range chosen, using slightly compressed samples here, includes Tibias, Tibias and Voxes and Full Organ.

When using organ voices, it seems to work well to change sounds between the various organ  voices by using the data entry wheel, as a small turn moves you on through the voices. There are two banks of voices for each of the manuals and also for the bass pedals, which I  think you know is something I always appreciate, as it allows you to set a warm organ bass to  underpin the other more orchestral bass sounds. There is also a mono Lead Voice section, which  is good for topping off chords played on the upper, or can be taken down to the lower if you split  the keyboard, giving a quick and easy change of sound whilst playing.

There are sixteen pistons (presets) which are situated between the manuals, just where they  should be for easy use, and there is also a Rhythm Disable (D) button, so you can choose whether  the presets change the styles or not. An interesting thing is that the D button on the Ringway also  locks the Lower and Bass sounds, so you can use all of the presets without having dramatic and  perhaps inappropriate changes in backing sounds mid-piece and also with any way of playing,  whether you prefer single fingered chords, fingered chords or chords with pedals.

The RS600 is supplied with 80 complete preset sounds (5 sets of the 16 pistons) and these  effectively cover all genres that most players like. When you turn it on, it always comes on with the default general set, perhaps best described as a potpourri or sampler of voices. This set includes a  Brass Band, some Georges Zamphir Pan Pipes, a Marimba for playing Yellow Bird and a Full  Organ with Choir. One thing to beware of here is that if you set your own pistons, the way it works means it is essential you save them before you turn off the organ, as if you don’t, when you turn it  back on the default set will be back in place of your presets, which would then be lost.

Every factory preset in the organ uses the Split facility to effectively create a third manual, with a  suitable sound set to the right hand end of the Lower Manual to make a good musical change by  simply moving from playing on the Upper to playing using the Split section.

Moving on to the Styles, there are 200 of them, including 150 from Orla’s very popular ‘Super  Style’ library, all of which have been looked through and adjusted to ensure they give the best  possible results here. Each Rhythm Style has Intro, Ending, two fill-ins and two variations of Style,  plus it is possible to rebalance the parts of the Style if you want to create something a little different and personal to you.

Being mainly Orla Styles, they are very easy on the ear and work easily with a wide range of  music, because they are not too busy. This is great, as it really does make for a nice gentle feel to  music making at the Ringway. Of course there are busy rhythms, like the Sambas perhaps, but the  joy comes from putting on say a gentle Swing or Bossa Nova with a subtle little guitar pattern  playing the chords and leaving you space to play over the top.

Someone else we don’t really hear anything about now is Ray Conniff with his orchestra and  singers. It has been a while since he passed away but when you think what a dominant force he  was in the world of popular music, it is strange we so rarely hear anything of his broadcast on the  radio. What makes me think of this is that the RS600 has a great Style called Vox Swing, which  really reminds me of his band, with the backing singers doing their finger clicks and singing in the  background!

The styles include a Reggae, which isn’t something I have much call for in my life, though I do  remember selling an organ years ago by playing some Reggae on it! I was shown this style on the  Ringway whilst playing the UB40 hits, Red, Red Wine, and it was very effective. Another one I  really liked is a sort of Carlos Santana Latin Rock which has a huge Distortion Guitar sound,  something I always enjoy!

There are the usual inputs and outputs, including MIDI, a simple rhythm sequencer and a  recorder that works by just pressing Record and then playing.

I think this new Ringway RS600 is a superb product; they are just the sort of instrument that could re-invigorate the organ world  if only they were in every major shopping centre around the country.