Earlier this year Yamaha announced the release of their new CLP 700 series of epianos, so you might be wondering: What’s the difference between the CLP600 and CLP700 pianos?

First off, let’s take a look at the controls on these two pianos ranges. The 700 series from the CLP775 upwards offers a neat touch panel for improved user interaction with the piano, a big step up from the limited, rudimentary buttons on the 600 series models. This builds upon the basic concepts on the CLP series pianos of simplicity and ease of use.  The touch panel further blends into the piano’s gloss black or white finish when turned off, making it practically invisible.

The panel on the previous CLP 600 Series

With the playing experience, Yamaha have now expanded their binaural sampling technology to include the Bösendorfer grand piano alongside the very well known CFX grand piano. Binaural sampling is a brilliant advancement in audio reproduction, or, put simply, when using headphones with the 700 series you will experience a near perfect recreation of what these two pianos would sound like if you were sitting at them.

The GrandTouch key system has also been implemented into all of the 700 models, replacing the NWX keys used on some of the 600 series models. This offers a far more authentic hammer action and key response when playing. This is a very useful feature when it comes to switching between an ePiano and an acoustic piano, as the less difference there is between the two in terms of the physical playing experience, the easier the transition.

The CLP795GP, 785 and 775 models further offer a new Grand Acoustic Imaging feature for when you’re using the stereo 3-Way speaker system built into the piano itself. It aims to offer a perfect reproduction of the soundstage created by the resonating body of a full size grand piano, achieved by very specific speaker driver placement in the piano itself alongside some clever digital signal processing. But what does this actually mean? Well it simply refers to the fact that sound radiates out from a grand piano in a particular way, and most of the sound is created by the large soundboard resonating or vibrating with the strings.  Grand Acoustic Imaging aims to mimic this to give a more powerful playing experience.

All the 700 series models give you 38 voices and 21 voice demo songs, bar the 795GP and 785 which boast 53 voices and 25 voices demo songs, offering an increase over the 600 series. Among the new voices are ones based on the early ‘Fortepiano’ piano, perfect for getting an authentic sound for 18th and 19th century classical music from composers such as Chopin, Beethoven and Mozart.

Like with the higher end 600 series pianos, Yamaha have included their signature spruce cone speaker drivers, which uses the same wood stock used for manufacturing their piano soundboards, a concept aided by their vast knowledge in the HiFi industry.

Physically, the 600 and 700 series counterparts are almost identical sizes, maintaining the high end, slim and compact design for the majority of the range, along with 2 GP or Grand Piano models.

Like with the 600 series, all models give you full recording capability with the ability to export recordings (in a .WAV format) via USB, and (apart from the 735), the ability to connect via bluetooth and use the piano as a speaker or for accompaniment. 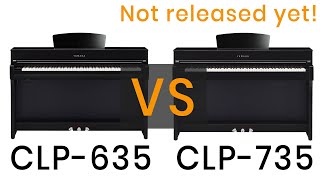 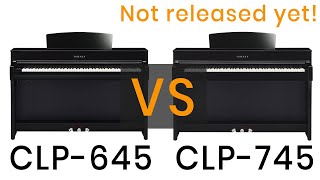